1st October is International Coffee Day so at Tchibo Coffee Service we are celebrating all things great about our beloved hot drink! To mark the occasion, we thought we would share some facts you possibly didn’t know about your favourite pick-me-up…

1. The chemical name for caffeine is Trimethylxanthine.

2. Coffee is grown in an area call the ‘Bean Belt’. This is around the equator, between the Tropics of Cancer and Capricorn.

3. The most expensive coffee in the world is Black Ivory coffee. Made in Thailand, this coffee is prepared by elephants that consume the Arabica coffee beans and process them during digestion. Their stomach acid breaks down the bean proteins and provides a characteristic robust flavour to the drink. Sounds gross but sells for about $50 a cup.

4. The largest coffee shop in the world is the Al Masaa Café in Riyadh, Saudi Arabia. It has 1,050 seats!

5. Decaf coffee isn’t strictly caffeine free. An eight-ounce brewed cup of decaf coffee actually contains 2 to 12 milligrams of caffeine in comparison, a regular cup of coffee which is between 95 to 200 milligrams.

6. After caffeine is removed from coffee beans, it isn’t discarded. It is refined and sold on to energy drink manufacturers and pharmaceutical companies.

7. The first machine for making espresso was built and patented in 1884 by Angelo Moriondo of Turin, Italy.

9. The first ever webcam was used to watched coffee. In 1991, researchers at the University of Cambridge set up a camera feeding a live picture of a coffee machine in the ‘Trojan Room’ so employees could see whether the pot was full.

11. There are more ways to enjoy coffee that you first thought… Cascara is a caffeinated fruit ‘tea’ made from the fruit of the coffee cherry.

12. In the 17th Century women were forbidden to drink coffee in public.

13. George Washington (no, not the American President) invented instant coffee in 1906 – he was an English chemist.

14. Coffea Charrieriana from Cameroon is the only naturally decaffeinated coffee in the world.

15. A plain cup of brewed coffee has only around 5 calories.

How many of these did you know (truthfully)?

Our coffee experts know all there is to know about coffee, and since we’ve been in the business since 1949, it’s fair to say we know our stuff! If you are looking for a coffee provider with passion as well as experience and expertise, get in touch!

Find the perfect coffee solution for your business 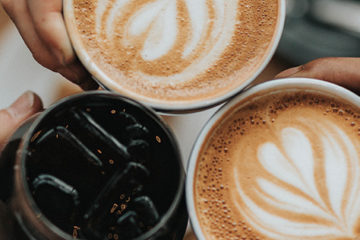